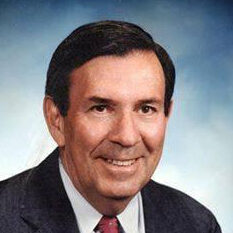 McCauley, 91, was one of the city’s longest-serving elected officials, serving 32 years in elective office in a political career that spanned five decades. He was the only person in city history to be elected to all four elective offices: ward councilor, school committee member, councilor-at-large and mayor. Following his retirement from politics, he remained an active and popular figure on the local scene, writing a newspaper column on Quincy history, participating in local civic organizations and offering analysis and commentary on city politics.

At the urging of Father Hart, McCauley’s parents sent him to Boston College High School, and McCauley graduated from B.C. High in the Class of 1948. Following graduation, he spent a year on active duty in the U.S. Navy before attending Boston College, paying his tuition by working as a commercial clam digger. He later graduated from Bentley College (now Bentley University) and earned a diploma from the Indiana University Graduate School of Banking. In 1954, McCauley married Sandra MacKinnon of Hough’s Neck, where the two settled and raised five children.

In 1958, McCauley accepted a job as a teller with the Shipbuilder’s Cooperative Bank. Within two years he was appointed treasurer, and rose to become the bank’s president in 1968. He held that position until his retirement upon his election as Quincy’s mayor in 1981.

Political career
McCauley’s interest in politics began in the late 1950s, when a proposed urban renewal plan threatened to take his Hough’s Neck home and those of his neighbors. He began attending city council meetings regularly and in 1959, he made his first run for elective office, seeking a seat as councilor-at-large. He finished last in a field of six candidates.

McCauley would run again, however, and in 1963 he was elected Ward One councilor, a seat he held for two terms. During the 1970s, he served on the School Committee before moving over to the City Council, where he served two terms as councilor-at-large. In 1981, he was elected mayor, winning in a landslide by nearly 6,000 votes.

Mayoral term of office
McCauley entered the mayor’s office in January 1982 with a number of challenges facing Quincy. The city was running a $10 million free cash deficit, its credit rating had dropped and concerns had been raised about the operations at the municipally owned hospital. Pollution was rampant in Quincy Bay. In the schools, meanwhile, a 50 percent drop in enrollment following the end of the Baby Boom had resulted in the closing of numerous public schools, angering city residents.

The new mayor wasted no time in establishing a tight rein over city finances. Drawing on his financial background, McCauley worked to eliminate government waste, assuming personal responsibility for preparing the city’s budget. He completed the school closings already in progress and implemented a school reorganization plan, instituting the middle-school plan still in effect today. And on the recommendation of then City Solicitor William Golden, McCauley filed the lawsuit that led to the creation of the Mass. Water Resources Authority and the ultimate clean-up of Quincy Bay.

At the same time, the McCauley administration upgraded the Quincy Police Station, built a new animal shelter and completed a renovation and addition to Quincy City Hospital. Private development also boomed: McCauley’s eight years as mayor saw the construction of both Presidents Place and the Crown Colony Office Park.

In July 1988, as a credentialed reporter for The Quincy Sun, McCauley covered the Democratic National Convention in Atlanta. McCauley wrote a number of articles on the convention, at which Massachusetts Gov. Michael Dukakis received the Democratic nomination for president. Dukakis was later defeated by Republican nominee George H.W. Bush.

Changing times
McCauley’s term of office coincided with a dramatic change in the city population, as an influx of Asian immigrants came to Quincy. His administration was credited with welcoming the new residents, securing state funding for adult ESL classes and instituting a computerized language translation service at the police department. The city also hired a community education coordinator, a trilingual outreach advocate and an emergency interpreter for the police. For its efforts, the McCauley administration received a gubernatorial citation in 1989 recognizing its Asian outreach initiatives.

After serving four terms as mayor, McCauley decided not to run again, leaving the mayor’s office in January 1990. The following year, he began a six-year term as executive director of the State Retirement Board under State Treasurer Joseph Malone. In 1996, he returned to the Quincy School Committee and in 1997, he was re-elected to the City Council. He served as a councilor-at-large until January 2006, ending his political career as the council president. In addition to serving four terms as mayor, McCauley served in public office under seven other mayors: Amelio Della Chiesa, James McIntyre, Walter Hannon, Joseph LaRaia, Arthur Tobin, James Sheets and William Phelan.

That experience would prove useful when in the late 1990s McCauley authored a book on Quincy’s political history at the request of then-Mayor James Sheets as part of the city’s millennial commemorations. After his retirement from politics, McCauley wrote the weekly “Quincy’s Yesterdays” column for The Quincy Sun through December 2011. He was proud of the fact that he compiled 297 columns and never once missed a deadline.

In 2019, McCauley published his autobiography. Frank: From Bootlegger to Banker and Beyond recounted his improbable rise from clam digger to mayor. The book is available on Amazon.com.

Community Service
Less well-known than his political career was McCauley’s involvement in numerous charities and community service activities over the years. He served on the Selective Service Board and the Quincy Housing Authority Board in the 1960s and 1970s and later was appointed by Mayor William Phelan to serve on the Quincy Retirement Board.

A member of the Elks Lodge and the McKeon Amvets Post, McCauley was a longtime member and past president of the Quincy Lions Club. In 2010, he became the club’s first 50-year member; in recognition of his support for the club’s charitable activities, the club honored the milestone by creating the Frank McCauley Community Service Award, presented each year to a local “unsung hero” who aids the community.

He was also a dedicated Red Cross blood donor, a practice he began during the Blizzard of ’78 when the state asked business leaders to rally their employees to give blood. Thereafter, McCauley was a regular donor, personally donating more than 16 gallons of blood to the Red Cross.

Walking for charity
McCauley was well known around the city for his penchant for walking, and was often seen walking along Wollaston Beach in later years. Much of that walking was done for charity: In addition to regularly participating in the Interfaith Social Services walk and the Walk for Hunger, McCauley participated in the 26.2-mile Jimmy Fund Marathon Walk six times, personally raising more than $34,000 to fight cancer in children. In later years, he walked for exercise and enjoyment, logging 28,000 miles between 1997 and 2012.

In April 2020, McCauley and his wife, Sandra, contracted COVID 19; while he recovered, she succumbed to the illness. Following her death, McCauley moved to Florida to live with his daughter before moving to a memory care facility. He would survive a second bout with COVID and several health challenges before passing away on the 40th anniversary of his first election as Quincy’s mayor.

A Funeral Mass will be celebrated at Holy Trinity Parish in Most Blessed Sacrament Church, 1015 Sea Street, Quincy, on Tuesday, November 9, at 10 a.m. The Mass will be livestreamed on the church’s Facebook page (https://www.facebook.com/holytrinityquincy/). Interment, with military honors, to follow at Mount Wollaston Cemetery. In keeping with Mr. McCauley’s wishes, visiting hours have been omitted.

In lieu of flowers, donations in Mr. McCauley’s memory may be made to the Houghs Neck Community Council Scholarship Fund, 1193 Sea Street, Quincy, MA 02169.